Take one part rock ‘n’ roll, one part jazz, and one part country, shake it up with a gorgeous and dynamic voice and call it A Simple Twist. 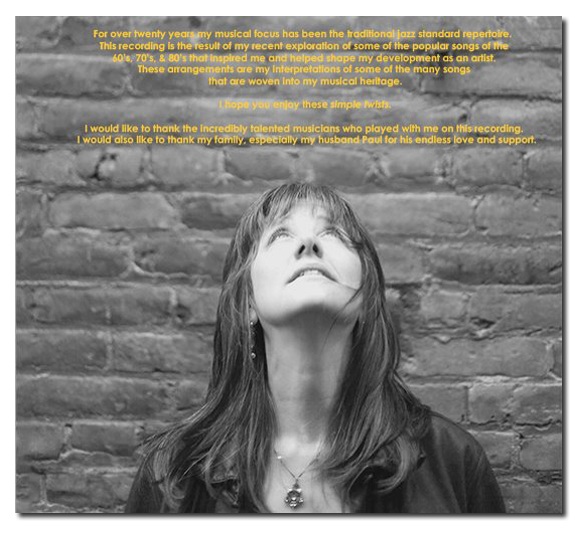 Laura Landsberg’s talent comes naturally; she is the daughter of world-renowned trombonist and composer Ian McDougall. “I was born in London, England while my father was playing with Johnny Dankworth, and he used to play Laura to me on his trombone when I was a baby,” Landsberg says with a tinge of shyness. .

Van Morrison’s Into the Mystic, lures us in with a country treatment that has Landsberg singing with a haunting loneliness and longing, a voice calling out over the weaving of the violin and pedal. With CCR’s Have You Ever Seen The Rain, Landsberg channels two iconic singers of the 60s by stating the melody with the calmness of Joni Mitchell and the confidence of Carole King. This arrangement, again with a country feel, makes the song new again and includes a great pizzicato solo by Daniel Lapp. Perhaps the most ambitious song on this album is the Led Zeppelin masterpiece, Dazed and Confused. This classic from the hard rock library is transformed to a moving ballad; drawing out the deep emotion of the song yet stated purely “unplugged.” This masterpiece of an arrangement gives the musicians a chance to fill in spaces with Miles-like fusion tones backing the jazzy angst that Landsburg’s owns. Elton John’s Your Song, Leonard Cohen’s Hey That’s No Way To Say Goodbye, Prince’s Purple Rain, Cyndy Lauper’s All Through The Night, Paul Simon’s Something So Right, Jimi Hendrix’s Castles Made of Sand, Stevie Wonder’s Secret Life of Plants, and Bob Dylan’s A Simple Twist of Fate, a song that lends its title to the CD, rounds out the recording.

Landsberg has been leading a busy life as a wife, a mother to six children, a college music instructor and a jazz singer. Living in Nelson B.C., she had a perfect setting in which to raise her family and the small town culture allowed her to sing, as time would permit. She has been able to sing a lot and her credits speak for themselves. Landsberg has performed with Desafinado, a Brazilian group out of Spokane, played the Kaslo Jazz Festival, the Sandpoint Jazz Festival in Idaho, performed with Chris Brubeck, the bass playing son of Dave Brubeck, Miles Black, Pat Coleman, Steve Dawson, Daniel Lapp, as well as appearing with the Spokane Jazz Orchestra, Hugh Fraser and VEJI (Vancouver Ensemble of Jazz Improvisation).

Now though, life is returning to the roots, to the country, returning to the songs that have inspired her over the years and given her a canvas to paint her own pictures. Indeed, it truly is love at first listen and no doubt the start of a long love affair with Laura Landsberg’s A Simple Twist!